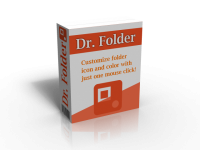 Dr. Folder is a software that search and replace the standard icon of a folder on any other icon. It has a pretty and friendly interface. It is a powerful software and easy to use. You can change icons of folders quickly and freely just by clicking several buttons. So, using Dr. Folder can save you lots of time. The most important is that it can make your folders lively and I think others will envy your beautiful folders!

Dr. Folder allows you to: