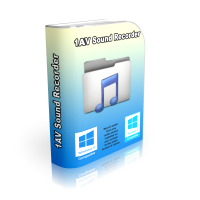 Being able to illustrate your point with comprehensive examples and using foolproof means of communication is of critical importance, especially if your recipients rely on your responsiveness, and sometimes, conveying your message in writing does not seem enough.

For situations in which you need to record your voice for an extra touch of originality, software solutions such as 1AV Sound Recorder are there to help you and make the entire process as untroublesome as possible.

Intuitive tool that helps you record audio from any source

Before anything else, a few words are in order about the program’s main capabilities. What it does is help you record sound from any source on the computer. It can thus be a handy companion when trying to capture your voice, what you hear, or audio from external devices connected via line-in.

Following an uneventful setup, the program greets you with a simplistic and intuitive user interface that should pose no difficulty even to the more inexperienced of the bunch.

Captures sound and automatically saves it as MP3 files

You will first need to select the audio device you want to use in your inquiry as well as indicate an output folder for your recordings, which will be saved to your PC as MP3 files.

As for how to trigger and manage the recording sessions, things are quite straightforward, with only three buttons being packed in the interface: one initiating the process, another pausing it, with the last one being responsible for ending the task.

Note that there is no need for you to save your recording since the program will automatically do that for you, with a button allowing you to open the said directory and explore the outcome.

Packs some advanced settings as well

In case you are keen on making more advanced tweaks, there are settings you can take a glimpse of. The program enables you to choose between a constant and variable bit rate as well as to indicate the encoding quality.

Besides, you may handle the mode selection, with options such as standard stereo, joint stereo, dual channel, and mono being available.

On an ending note, 1AV Sound Recorder is an approachable tool helping you capture audio without interrupting your workflow. It demands little user input, which makes it a tool aimed at all users alike, but it also packs a series of features you can customize so that your recording session meets expectations.