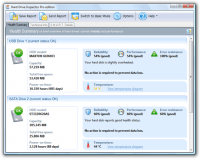 Imagine how you would feel if you had suddenly lost all the data from your computer: documents, e-mails, addresses, accounts, saved passwords, photos, music, and video. Sounds like a nightmare, doesn’t it? But that’s exactly what will happen when your hard drive, a computer part which stores information, crashes. Since the hard drive has constantly rotating mechanical parts it suffers from wear and tear. And it can break down any moment without prior notice leaving you with ashes, naked.

Sure, a hard drive is just a piece of metal and easy to replace, but can you as easily restore its unique contents reflecting years of your life and work? Prevention is better and much cheaper than cure. Use Hard Drive Inspector which continually monitors disks’ health and warns you in case of danger, thus reducing your chances of shocking “surprise”. Download Hard Drive Inspector now, tomorrow may be too late for your hard drive.

Year by year notebook computers are replacing usual desktop PCs at work and at home. Notebooks are small and handy, but they are also much more fragile than desktops. For a number of reasons notebook hard drives are even less reliable than those of desktops. These reasons are:

That’s why notebook hard drives need constant health monitoring to prevent data loss. Such monitoring can be performed with Hard Drive Inspector Professional (HDIP). But the Professional version is intended mostly for desktop computers and doesn’t take into account some peculiar features of notebooks. For example, HDIP periodically reads S.M.A.R.T. data from a hard drive to control its health. Reading this data when the hard drive is in sleep mode activates the disk which in turn causes an unnecessary increase in power consumption and reduces battery life. In addition, the average working temperature of a notebook’s hard drives is usually higher than the temperature of a desktop’s disks. So, when used in notebooks, HDIP may show false overheating alerts.