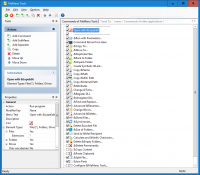 FileMenu Tools is a program that you can use to customize the Explorer right-click menu. It can be easily installed and configured, even by less experienced users.

FileMenu Tools has more than 30 built-in utilities to perform any operation on files and folders that you can imagine (move/copy files to another folder, sync folders, batch renaming, copy path/name to clipboard, shred files, view size of folders, split files, generate checksums, and much more). And if the built-in commands don’t cover your needs, then you can add custom commands, submenus and separators to completely customize the context menu. You have total control to customize the custom commands like menu text, icon, element types, modifier keys, arguments, working folder, multiple instances, administrative mode, etc.

You even can configure the “Send To…” submenu or enable/disable commands added by other applications to the context menu.