This page has been automatically translated. Click here to read original English version.
Sale has ended but you can still get this app.
Download Sudoku Pro Now 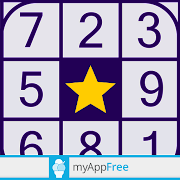 Sudoku Pro has been awarded the “App of The Day” by MyAppFree ( https://app.myappfree.com/). It will be free to download from 20 to 22 June! Get MyAppFree to discover more offers and sales!

Sudoku is a globally addicting puzzle game. Sudoku is a logic-based, combinatorial number-placement puzzle. The objective of sudoku is to fill a 9×9 grid with digits so that each column, each row, and each of the nine 3×3 subgrids that compose the grid (also called "boxes", "blocks", or "regions") contain all of the digits from 1 to 9.

By playing sudoku regularly you can boost your concentration and focus, prevent or ease depression, dementia, and even Alzheimer's disease according to some studies. Sudoku is good for any age between 6 or 120 because sudoku develops mental abilities and keeps them in good condition. sudoku is a highly addictive game with no side-effects whatsoever and while it may involve a person deeply into it, their brains will be thankful.

There are a lot of interesting facts about Sudoku. But the main point is to play sudoku puzzles every day so that you can feel the sudoku magic. If you still don't play Sudoku, it is good for you to start now and join the worldwide community of fans. If you do play Sudoku then teach someone who doesn't by sharing this app with them, because it is a rare occasion in life to get an appraisal for putting a new addiction in someone's life.

For any question or suggestion about our app, please contact us at contact.sudokuApp@gmail.com