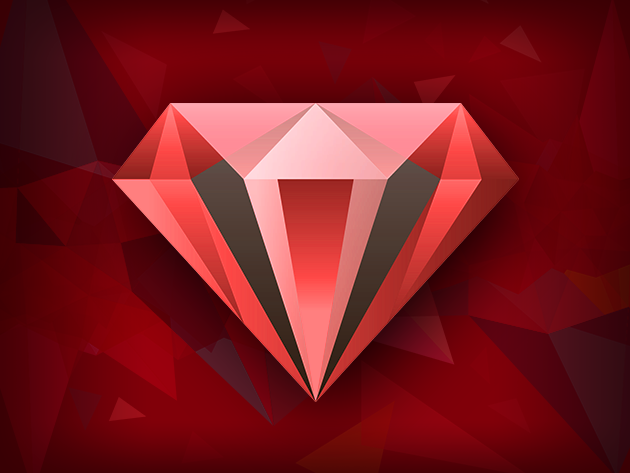 Ruby on Rails is one of the most powerful all-purpose programming languages and, as such, is also one of the most commonly sought after by employers. This web application framework is designed for rapid prototyping, allowing you to churn out and build site concepts efficiently. This course will bring you up to speed.

Ruby on Rails comprises two tools: Ruby and Rails. Rails is a full-stack web application framework, while Ruby is the language with which you write on Rails. In this course, you’ll start up with Ruby programming basics, exploring syntax and common terminology.

Ruby is object-oriented, like Java, Python, and other programming languages, which means that it is interpreted by a model in a Rails framework mapping to a table in a database, and a Ruby file. In this course, you’ll explore variables and arrays in Ruby in your next step towards mastering Ruby on Rails.

The next step on your Ruby journey is operators and exceptions. Through this course you’ll explore the Ruby comparison operator, Booleans, comments, exceptions, and much more.

In the 4th module in this Ruby programming series, you’ll learn about more unique concepts of Ruby. You’ll explore Ruby Unless, loops, break, next statement, and much more as you discover how to write complete applications in Ruby.

In this course, you’ll explore blocks, methods, return, classes, objects, and variables in Ruby. These tools will help you streamline your workflow and complete common development tasks fast and easily.

Continue on your Ruby mission with this course on modules, methods, symbols, FileIO, Ruby Gem, and debugging. This course acts as the major quality control class, teaching you how to efficiently and effectively perfect your code to make it more dynamic and interactive.

This massive course will encompass all of your Ruby on Rails learning, reinforcing what you already know while introducing you to many concepts that you don’t. By course’s end, you’ll have an excellent grasp on this open-source framework and be able to leverage your experience into high-paying jobs.

One of the most convenient features of Ruby is the built-in debugger. Debugger pauses execution wherever an error has been made and seeks input of user commands. In this course, you’ll explore the Ruby debugger library as well as several other debugging solutions that will help you clean up code to make it perform optimally.

From A to Z, you’ll leave no stone unturned in this massive Ruby on Rails course. Starting from the absolute basics, you’ll work your way to advanced concepts by actually coding with Ruby on Rails. By the end of the course, you’ll have developed a valuable, employable skill that will set you apart from other developers.

Reviews for The Complete Ruby on Rails Super Bundle