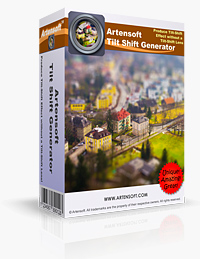 Re-create the tilt-shift effects by using your PC – no tilt-shift lens required! Make stunning dioramas by using computer-generated tilt-shift effect. Artensoft Tilt Shift Generator helps you reproduce the appearance of a miniature scale model in post processing without restricting yourself to a certain angle at the time of shooting – and without investing in expensive tilt-shift glass.

Tilt-Shift Generator produces convincing, natural-looking miniatures at a small fraction of the price of a real tilt-shift lens. And the best part is it works just as good as or better than glass-and-metal tilt-shift lenses.

Tilting the lens simulates a macro shot or a miniature scene. This one effect is easy to reproduce in the post. You don’t lose anything by doing the tilt-shift effect in post-processing, and you won’t gain anything by using a real tilt-shift lens to capture the same scene. In fact, by using a real tilt-shift lens, you lose much of the convenience provided by modern autofocus cameras, sacrificing the AF and automatic aperture control. Check out today’s tilt-shift lenses: they cost an arm and a leg, yet they’re all manual focus, and some of them still require you to set aperture manually and use stop-down metering, slowing down your shooting a great deal.

The tilt-shift technique allows photographers tilting plane of focus, achieving selective focus effect and producing photos with characteristic ‘macro’ look. Pictures taken with a tilt-shift lens reproduce the look of a miniature scene shot up close, at a macro distance.

The effect has been known since advent of boxy, wooden large format cameras. Using flexible bellows for camera movements, large format photographers could turn any lens into a tilt-shift lens, reproducing faux-diorama shots without an extra investment.

Today’s photographers shooting 35mm film and all kinds of digital cameras can only achieve the effect by either using a dedicated, expensive tilt-shift lens or reproducing the effect in post-processing with photo editing software. With the most affordable tilt-shift lens produced by a major manufacturer costing more than $1200, tilt-shift photography remains an expensive hobby for most amateurs. Technological constraints and limitations of even the best tilt-shift lenses (manual focus, manual aperture, stop-down or manual metering, lack of zoom etc.) make using these lenses inconvenient even to dedicated professionals shooting anything but still architecture and landscapes.

Tilt-Shift Generator offers enthusiast photographers an easy way of reproducing the ‘miniature‘ effect of a tilt-shift lens without actually owning one. The tool allows Windows users to emulate the selective focus effect by post-processing images taken with any camera, any lens at any setting.