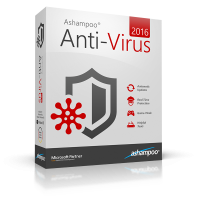 You don’t have to sacrifice speed and comfort over security when you protect your data with Ashampoo Anti-Virus.

With powerful automated real-time protection and frequent updates, Ashampoo Anti-Virus offers reliable protection against all common Internet security threats, known and unknown. And it does so in a very discrete and unobtrusive manner without restricting your freedom of use.

Once installed, you don’t have to configure Ashampoo Anti-Virus. Sophistcated real-time protection including our powerful behavior blocker comes right out of the box. Simply install and forget.

Heavy on security but light on resources

Despite sophisticated technology, Ashampoo Anti-Virus is surprisingly simple to use. It was specifically designed to restrict the need for user interaction to a minimum. Think of Ashampoo Anti-Virus as a highly-skilled bodyguard that autonomously handles dangerous situations with as little user intervention as possible.

Always up to date and always protected

With daily signature updates, your Ashampoo Anti-Virus is always ready to detect and neutralize both old and new threats. And best of all, updates happen fully automatically.

Don’t sacrifice speed and comfort over security. Protect your data with Ashampoo Anti-Virus.