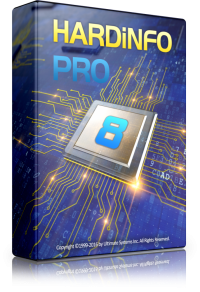 All in one Hardware System Info and Benchmark

HARDiNFO have one of the most advanced CPU benchmark on the market with real application simulations which includes all kind of application task types ranging from Office/Word/Excel to Photoshop, 3D CAD math calculations and AI Neural Network Simulations.

Export HTML Reports
Export detailed hardware information about your computer to text or HTML formatted reports which can be used for technical support or other maintenance purposes.