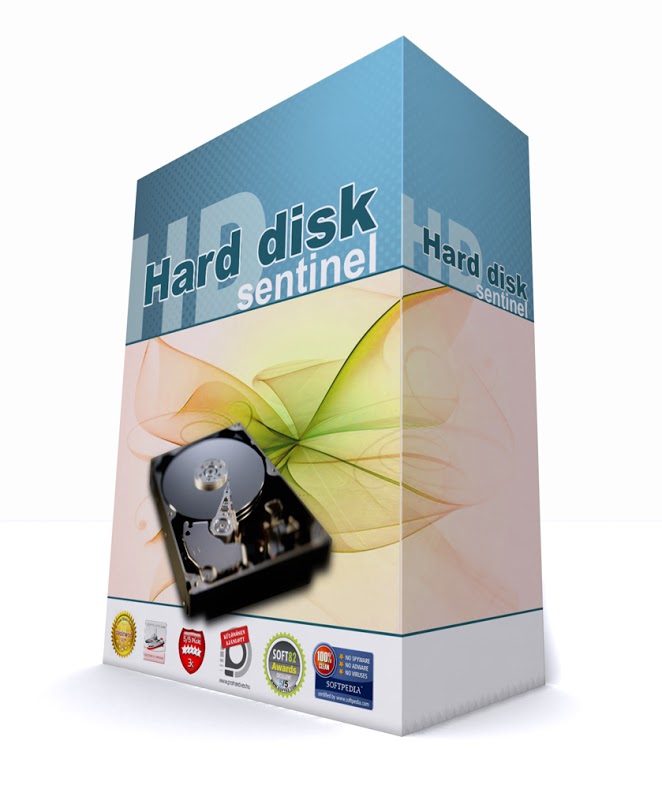 Hard Disk Sentinel is a hard disk monitoring software with highest possible support of HDD/SSD/SSHD (hybrid) drives. Its goal is to find, test, diagnose and repair hard disk drive problems, report and display SSD and HDD health, performance degradations and failures. Hard Disk Sentinel gives complete textual description, tips and displays/reports the most comprehensive information about the hard disks and solid state disks inside the computer or in external enclosures (USB / e-SATA). Many different alerts and report options are available to ensure maximum safety of your valuable data.

The software monitors hard disk drive / HDD status, including health, temperature and all S.M.A.R.T. (Self-Monitoring, Analysis and Reporting Technology, built in most hard disks, solid state disks and hybrid drives (SSHD) today) values for each disks. Also it measures the disk transfer speed in real time which can be used as a benchmark or to detect possible hard disk failures, performance degradations.

Hard Disk Sentinel is the perfect data protection solution: it can be effectively used to prevent HDD failure and SSD / HDD data loss because it has the most sensitive hard disk health rating system which is extremely sensitive to hard disk problems. This way even a small HDD problem can’t be missed.

Easy to use interface
All information are displayed in the main window of the application. Quick controls allow easy navigation to access all hard disks, partitions and different information. Intuitive user interface elements display information by using green/yellow/red color to indicate the level of problem. Detailed text description and context sensitive help guides the user thru the features and options.

1. Install > 2. Configure > 3. Stay protected
Just install, configure alerts and your system is now safe. You’ll be notified about the problems – but if everything is correct, Hard Disk Sentinel just sits on tray and displays current status. The data is protected 24 hours daily, 7 days a week.

Instant S.M.A.R.T. analysing
Hard Disk Sentinel can communicate with all IDE, Serial ATA, NVMe, SCSI, SAS and most USB hard disk drives, SSD and hybrid drives (SSHD) to detect their status and temperature. Hard disk status are displayed immediately as you launch the application, there is no need to analyse hard disks for a long period. It displays the current and maximum temperature for the hard disk. It reads all general and vendor-specific attributes and monitor their values. For advanced users, all raw data are displayed also including power-on time and number of read/write errors. Hard Disk Sentinel interprets the performance and fitness related S.M.A.R.T. values and displays the calculated Performance and Health percentage, total power on time and estimated lifetime remaining.

Hard Disk Hardware and Software Tests
By using Hard Disk Sentinel, it is possible to start hardware hard disk self tests. These tests can be used to effectively find all hard disk problems because built-in hardware methods are used to verify hard disk components (for example heads, servo, internal buffer in theShort self test). The Extended self test also verifies the complete hard disk surface, finds and repairs all weak areas and re-allocates the possible bad sectors. This is not possible with the software-based hard disk surface scan methods (for example, by using scandisk).

Logging
Hard Disk Sentinel logs all degradations in all SMART parameters and issues alerts in such cases to maximise data protection. For example, if a new bad sector is found on your hard disk, you will be notified.

Alerts
Hard Disk Sentinel has wide range of alerts upon different problems. It can send e-mail (with e-mail->SMS gateway it can be SMS warning to your mobile), network message, can play sound alerts and so.There is an option to send daily emails about current status.

Shutdown
Offers option to shut down the computer on hard disk failure, HDD overheat or health degradation. This option can be used in combination of the alerts to prevent further data loss.

Hard Disk Details
Detects and displays every information about the hard disk, from the revision number and buffer size to all features it has. The maximum available and current transfer modes are also displayed.

Information on demand
Current hard disk temperatures and health are displyed on the system tray and can be displayed in a small status window, the desktop itself or in a sidebar gadget (under Windows Vista or newer operating system). Average and maximum temperatures are logged for all hard disks and these informations are displayed in graphs for statistical purposes.

Hard Disk Performance
Logs how much data were read from or written to the hard disk. Displays current transfer rates for both reading and writing and estimates the maximum available (theoretical) transfer rate for a particular hard disk.

Hard Disk Partitions
Displays partitions for each physical hard disks and type and usage informations about them so you cannot run out of space. Hard Disk Sentinel sends this information automatically in alert/status messages.

Clock Synchronization
It offers option to synchronize the PC clock with an atomic clock via NTP (Network Time Protocol).