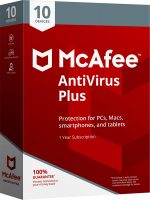 Reviews for McAfee AntiVirus Plus