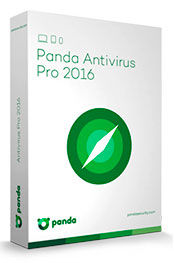 Protect your network and browse online with peace of mind with Panda Antivirus Pro 2016, the best antivirus on the market.

PROTECT YOURSELF AGAINST ALL TYPES OF KNOWN AND UNKNOWN THREATS

Install Panda Antivirus Pro 2016 and forget about security issues. Remove viruses and any other type of threat or malware from your computer and Android™ smartphone or tablet. Essential antivirus protection with real-time security for your devices.

PROTECT YOUR WIRELESS NETWORKS AGAINST HACKERS AND INTRUDERS

Panda Antivirus Pro 2016 includes a bidirectional firewall to protect your Wi-Fi network from intrusions and unwanted connections. Chat, share photos and videos, read your favorite blogs or simply surf the Web with complete peace of mind.

PROTECT YOUR PC AGAINST ONLINE FRAUD

SECURE YOUR COMMUNICATIONS AND WI-FI NETWORK

Panda Antivirus Pro 2016 detects vulnerabilities in your Wi-Fi network and helps protect yourself against intruders. In addition, you’ll get tips and recommendations to enhance the security of your network.