This page has been automatically translated. Click here to read original English version.
$12.00 (59% off)
Sale has ended!
Get More Giveaways And Discounts 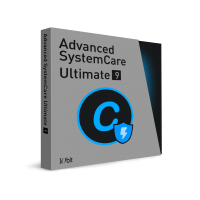 Based on #1 ranked BitDefender antivirus technology and IObit anti-malware engine, Advanced SystemCare Ultimate 9 incorporates top anti-virus capabilities, as well as the already proven comprehensive PC tune-up ability. It provides protection against all kinds of security threats, system slowdown, freeze and crash without slowing down your system.

Brand New Anti-Virus Technology
Some PC users have no idea whether their PC is infected or safe. To make sure your PC is safe from attacks, Advanced SystemCare Ultimate 9 has a brand new anti-virus engine which increases its sensitivity whilst detecting and removing the latest Virus, Ransomware, Spyware, Adware, Dialer and Hide-app, to guarantee you have a safe and healthy PC.

Perfect Windows 10 Compatibility
For those of you who are Windows 10 users, Advanced SystemCare Ultimate 9 added Win 10 Reinforce to help you stop all the privacy gathering behaviors by Win 10 itself, including your location, sound message, contacts, etc. And when you use Microsoft Edge, Advanced SystemCare Ultimate 9 will guarantee your online activities would not be attacked by malicious applications and browser add-ons.

Up to 300% Faster PC
Advanced SystemCare Ultimate 9 enhanced its database of Registry Fix, Privacy Sweep and Junk Files. That may save you a lot of time in one-click optimizing and cleaning, and make your PC run like a new one, by boosting startup speed, optimizing registry, as well as removing unwanted applications and other useless files which make your computer slower.