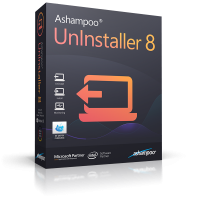 For a clean and fast PC without unwanted programs, toolbars, plugins or Windows apps!

Ashampoo UnInstaller improves on the strengths of its predecessor! New profile-based uninstalls help completely eliminate unlogged or convoluted installations and system-default uninstall procedures have been augmented with automatic deep scans. The new drag and drop feature allows for instant uninstalling of applications while the integrated file wiping technology permanently deletes sensitive data. All cleaners have been updated and support for Opera has finally been added! Discover a more vibrant user interface with more useful details and speedier work flows and rid yourself of unwanted programs once and for all!

Uninstall without leftovers
Windows only deletes what default installations mark as deletable – and that is very little! Leftover files, Registry entries or invalid links frequently remain after default uninstallations. These frequently cause errors or system slowdowns. Thanks to sophisticated search and cleaning mechanisms, Ashampoo UnInstaller locates and eliminates leftovers down to the last byte!

Faster and safer web browsing
Unsafe, unwanted and malicious plugins are present in millions of browsers. Though disguised as nagging toolbars or seemingly helpful add-ons, Ashampoo UnInstaller finds them all! Track down extensions that manage to stay hidden from your browser, review them easily with the help of built-in ratings and get rid of them if need be.

Installation monitoring with in-depth cleaning
Ashampoo UnInstaller creates logs that fully document program installations and guarantees program removal without leftovers. Nothing can hide from the installation monitor. Installations that weren’t logged can still be efficiently removed thanks to a smart deletion mechanism. An in-depth cleaning algorithm ensures that no longer required files and entries that would otherwise remain on your system will be deleted without exception.

The sonar for your PC
Snapshots give you a powerful tool to understand even the most complex installation procedures. By comparing two snapshots (before and after states), the program can detect even minute changes to your machine. Whether you want to know which Registry entries were created or where data was copied, you’ll find every information neatly arranged and clearly laid out in this application. Fans of previous versions will be happy to hear that you can also merge two snapshots to create a more complete installation log!

No more problems with nested installations
Modern software frequently relies on nested setups that install several programs in parallel and this is where many competing products fail. Ashampoo UnInstaller will never fail you! Even the most complex of installations can be undone in a flash and step by step. You decide what stays and what goes!

Clean uninstallations without logs
Ashampoo UnInstaller logs program installations and guarantees their removal without leftovers. Installations that weren’t logged can still be efficiently removed thanks to a smart deletion mechanism. You can now get completely rid of old and no longer needed programs!