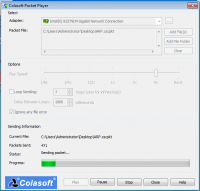 Replay a packet file is very simple. First, you need choose an active network adapter for sending packet, and then specify a packet file, you can also set following options: