This page has been automatically translated. Click here to read original English version.
Sale has ended but you can still get this app.
Download Cuchulain of Muirthemne : The Book App Now 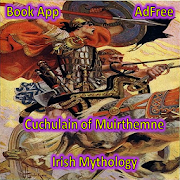 Cuchulain, one of the greatest heroes of Irish mythology and legend, was a warrior in the service of Conchobhar, king of Ulster. Best known for his single-handed defense of Ulster, Cuchulain is said to have lived in the first century B . C ., and tales about him and other heroes began to be written down in the A . D . 700S. Cuchulain's adventures were recorded in a series of tales known as the Ulster Cycle.

This is Lady Gregory's collation of the Cuchulain cycle. Cuchulain was a mighty warrior, 'the Hound of Ulster', the hero of 'the Red Branch', a band of elite fighters of ancient Ireland. Cuchulain is the subject of numerous tales set in pre-Christian Ireland, including the pivotal 'War for the Bull of Cuailgne'. The mythological and supernatural elements are tightly interwoven in this saga, including the ever-present Sidhe (fairies); and Celtic gods and goddesses, particularly Morrigu, the goddess of war. As for the battles, they are principally composed of single combats as hair-raising as any in the Iliad or the Mahabharata. The female characters are vivid and self-motivated. The saga is overlaid with episodes which could be echoes of ancient myths, for instance the story of the two shapeshifting swineherds. There are sections of great poetry embedded in the text, particularly the lament of Emer on Cuchulain's death.

Reviews for Cuchulain of Muirthemne : The Book App