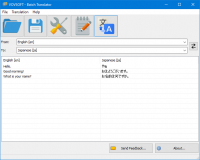 Translate multiple texts at once!

Batch Translator can help you translate multiple texts at once. The current version supports IBM Cloud Language Translator API which can translate up to 1,000,000 characters per month for free.