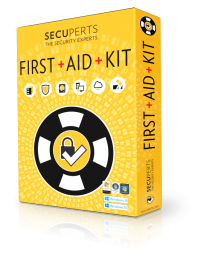 The First Aid Kit for your data and your Windows installation!

Protect yourself from data loss and Windows problems. When simply nothing works any more or troublesome viruses and Trojans are making your life miserable! Be prepared for emergencies – with the SecuPerts First Aid Kit!