This page has been automatically translated. Click here to read original English version.
Sale has ended but you can still get this app.
Download Material Reborn Icon Pack Now 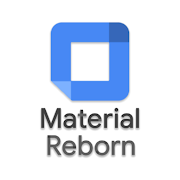 Material Reborn Icons drawn in style based on the latest new icons from Google.
I decided to refine it so that everything was in the same style and your desktop looked great.

What is there:
- Round white icons in new style.
- Thematic wallpapers.
- Thematic Clock widget.