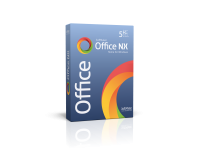 Your new Office suite. Intuitive to use, seamlessly compatible.

SoftMaker Office NX Home for Windows is the No. 1 alternative to Microsoft Office and LibreOffice. Plus, it’s easier to use and highly reliable. The software offers everything you’d expect from a professional office suite. Thanks to the native use of the file formats DOCX, XLSX and PPTX, it offers seamless compatibility to Microsoft Office. The resource-friendly system requirements allow a quick workflow with nearly any hardware setup. The office suite can be installed to a USB flash drive so that it can be used on any PC without installation.