This page has been automatically translated. Click here to read original English version.
$14.90 (62% off)
Sale has ended!
Get More Giveaways And Discounts 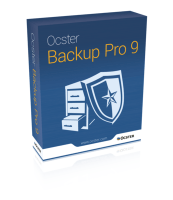 Ocster Backup Pro 9 has extensive support for storing your backup data in the cloud. And not just for normal file backups: even image backups (backups of entire drives) are supported.

A highly optimized infinite incremental backup system is used to ensure that only those parts of your data that have changed since the last backup need to be uploaded to the cloud.

High quality encryption protects your data from access by others.

Of course, Ocster Backup Pro 9 is not only about Cloud Backup. It also supports storing your backup data on traditional local storage media like hard drives, SSDs, USB sticks or network drives.

We have made extensive speed optimizations in Ocster Backup Pro 9.

All backup types, whether they are image based or file based, were tuned and polished to make them better and more streamlined.

Common backup operations can be up to 40% quicker!

Very easy to use

Does not disturb you